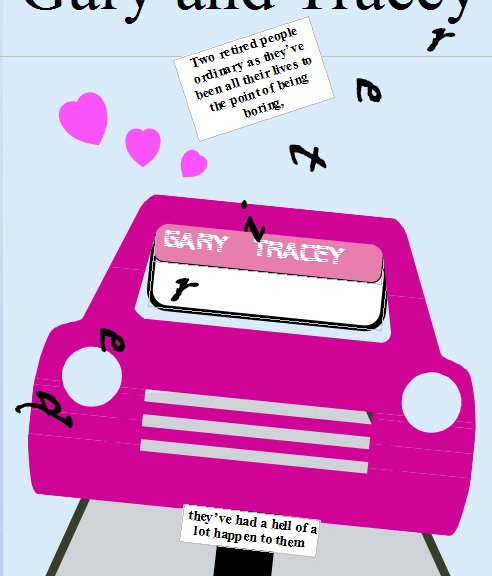 The path that Gary and Tracey were walking on, after leaving the churchyard, ran past Ewan and Brenda’s. Gary and Tracey knew that instinctively, whenever they passed that other couple’s Shetland pony grazing where it always did, as it was now : at the bottom of Ewan and Brenda’s garden . Gary shared his surprise with Tracey, at not seeing the pony’s two owners anywhere about.

Tracey had to agree that it was quite unusual for the Gems, Ewan and Brenda not to be there up at their house, looking down at their pony; keeping an eye on it. Tracey decided to climb over the fence to go up to the house and check on them as it really was so unusual to not see them anywhere about. Tracey was gone out of sight long enough for Gary to begin to fret. He never liked it when Tracey was away from him for longer than he thought she should be. It was almost fifteen minutes: how long he’d been waiting for her to come back to him. He couldn’t stand it any longer. He climbed over the fence too; looking forward to catching up with his Tracey and the Gems. When he got up to the house he didn’t see anybody; not Tracey; not Ewan; not Brenda. But he heard some talking. The one voice talking didn’t belong to any of his targets. He didn’t recognise the voice at all.  It made him quizzical; wanting to know more about what might be going on out of his sight. He was edging along the house wall to where he could hear the talking coming from, when what he saw next stopped him dead in his tracks.

Right there on the Gem’s back lawn was his Tracey kneeling beside Ewan, who was lying very comfortably on his back on the grass, kissing him. The unknown voice he’d heard talking was a DJ, a disc jockey, on the radio beside them. What was he supposed to think about that? And that’s what he needed to do; to think about this and about their so called loving relationship of so many years. What was she thinking? How long has it been going on behind his back? When she’d said she was meeting her girlfriends was she really meeting Ewan? All through these workings of his thoughts, Gary was getting angry and hot and feeling frustrated; being betrayed by the most important, most trusted and relied upon person in his life. Not to mention the fact that he worshipped her. Did worship her; past tense. With no words to say or a way to say them if he had, Gary simply turned on his heel and purposefully strode away.

Tracey must only then have looked up and seen Gary appear to march off. She knew him well enough; that he’d probably got the wrong end of the stick as usual. He looked all beetling and angry which meant he’d seen what she was doing, or thought he did; had made up his mind and gone off in a huff. She had to get him to stop and hear her out. But how could she just leave Ewan after finding him lying there with what looked like a sudden heart attack, when there was no one else there to help him. Where was Brenda?  Oh, damn it. She bawled out, “Gary Spall. Get back here right now or there’ll be trouble. I can’t do this on my own. I’m doing the best I can for him. Ewan looks like he’s had a heart attack and I can’t find Brenda. Get back here and help me”

What a complete fool he’d made of himself again to Tracey. But he knew what it looked like, so did she, he reckoned. He was never very good at weighing things up properly; seeing them as they were; instead, conjuring up upsetting theories; jumping the gun. He’d just done it again; unless it was an elaborate cover-up. No. Stop it, Gary, he told himself. Looking back over to where Tracey was, he completely got it. It may have been a tactic to distance himself from the idiot Gary of a few moments ago but, whatever it was, he ran to Tracey and her patient with the sole intent of being only honourable and useful. He could only hope that by doing the right thing after being such a fool he would redeem himself in his special one’s estimation.

“Okay, Trace”, he said, “let me make up for bein’ stupid by taking over from you for a bit with the old CPR.”

“Good. Thank you, Gary. At last I can stop. I couldn’t have kept it up much longer. I’ll go into Ewan’s place and ring for an ambulance. You take over.” As Gary got up close to Tracey and Ewan, a very strange thing happened. Ewan, apparently unconscious, suddenly started to convulse; his body suddenly went concave causing his head and shoulders and his feet to rise up off the ground while he lay there. Then, just as strangely, he stopped convulsing; was calm and quiet for a moment then quickly stood up. He turned to face the wall of his greenhouse then power-walked forwards into it. There should have been blood spilled from the cuts he should have got from the glass panels as they shattered from the impact. No blood… No distress in Ewan either. He simply came to a stop amongst the broken bits of greenhouse frame and quite a lot of glass shards. Gary and Tracey were gobsmacked. They’d never seen anything like that before.

The two were just about to shake off their amazement and go to Ewan to check him out when they heard Ewan’s voice from the other side of the greenhouse. Then he appeared telling them how surprised and pleased he was to see them there. They did a double-take at that looking from the greenhouse Ewan back to the greeting Ewan. Tracey made a sound that was supposed to mean, “But, uh, but, err.” Translation was unnecessary as Gary and Ewan were looking at the other Ewan and expressing something very similar. But then, the other Ewan looked at all of them. It appeared to panic; reached its hand into its jacket; then completely disappeared. Much as a soap balloon pops to nothing without giving a warning that it will.

For the next two hours, at least, Ewan, Tracey and her Gary played verbal ping-pong with all their thoughts and theories about what happened to them. Ewan was the most in the dark, of course. He hadn’t been involved at all with the goings-on earlier. He’d been washing his car out at the front of the house. The three agreed a tryst: none of them was to say a word to Brenda Gems about this two Ewan adventure they’d just had and, if they hadn’t witnessed it and known about it: her Ewan’s contributions to their life might have been stopped dead in their tracks.